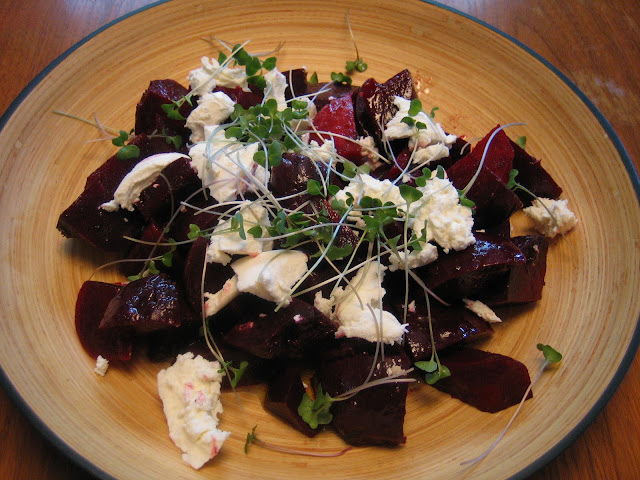 I love beets. Love. So no apologies for posting a recipe using a much-maligned vegetable. But you should really try it, even if you're usually a hater (this salad has been known to convert that kind of person). This is also a fave of my toddler.

I also love it when you can buy the beets with the greens still on. You can cut them off and use them like spinach, except that the stalk is also really yummy. Swiss Chard/Silver Beet is probably closer in description. I like to saute them in olive oil with garlic and a drizzle of soy.

What you'll need:
First, scrub or soak your beets. We will peel them after we cook them so they don't have to be super clean, but no clumps of dirt, please. Now put them in a big pot and boil them, skins and all. They take a long time to cook. Reckon on about 30-40 mins, depending on size. Cook until they are tender (easily piered with a skewer or small knife). Now let them cool. You can even put them in the fridge for a day.

Next don some rubber gloves (unless you want to be arrested for suspected murder) and rub the skins off. They will come off really easily. Run them under the tap to get rid of any skin remnants, but you don't have to be too pedantic - the skin's very tender usually.

Cut them up into bite sized pieces and place into a mixing bowl. Drizzle equal amounts of Olive Oil and Balsamic on them. You want them to be well covered and glossy, but not swimming. Give a good grind of black pepper and a generous pinch of salt. Like potatoes, they need salt. I like to use sea salt. Toss them about with some utensils, preferably non-wood ones or your nice wood servers will now be red! At this point you can refrigerate until an hour or so before you want to eat it (it's best eaten at room temp).

Tumble them into a nice serving dish (this nice bamboo one's from my mother-in-law) and spread them out nicely. Now take a fork to your chevre and crumble it over the top. Then snip some sprouts over and admire your handiwork.
Posted by leila at 7:00 AM

Email ThisBlogThis!Share to TwitterShare to FacebookShare to Pinterest
Labels: cooking, how to