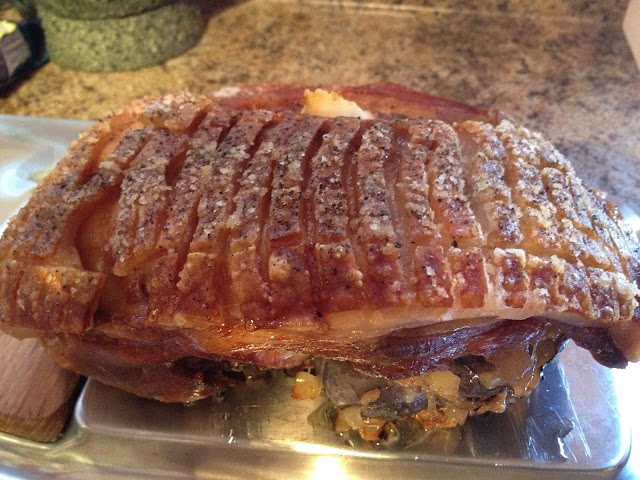 Do the words crispy, crunchy, salty, and succulent make you salivate? If so, then this dish is for you. Don't be grossed out if you're in North America. If you're from almost anywhere else in the world, you already know that pork cracking is where it's at.

Pork cracking is, yes, the SKIN of the pork, cooked until it is crispy perfection. Do it. Soon.

What's nice about this recipe is that the pork is slow-cooked so it is super tender and falls apart. In fact, I will use leftovers to make pulled pork sandwiches.

This one is based on this Jamie Oliver recipe, but written (I think) more clearly with a few changes. Here's how you do it.


OK. Preheat the oven to 425F. Take an exacto/stanley knife or single balded razor and score the skin through to the fat but not to the meat. Do this in 1cm strips. A regular knife won't cut it (pun intended).
Rub it all over with some salt and pepper. Now drizzle some olive oil over and rub it in. Now take a handful of salt (literally) and rub that into the skin, making sure it gets into the cracks. Add a bit of pepper.
Now whack it in your hot oven for about 40 mins, or until the skin starts curling up at the cuts. Once this happens, reduce the heat to 325F and cover the pan with foil. Don't burn yourself like I did. I also found it hard to get it totally airtight, so do your best.
Leave it in the oven for about 4 hours. Then take the foil off, turn the heat back up to 400F and tumble in your veg and bay leaves. Roast for about an hour. The crackling should crisp right up and be perfect. Keeping your hands off it is the hardest thing. Oh and making sure no one feels cheated out of their fair share. Believe me. This has started family feuds.
Posted by leila at 7:00 AM