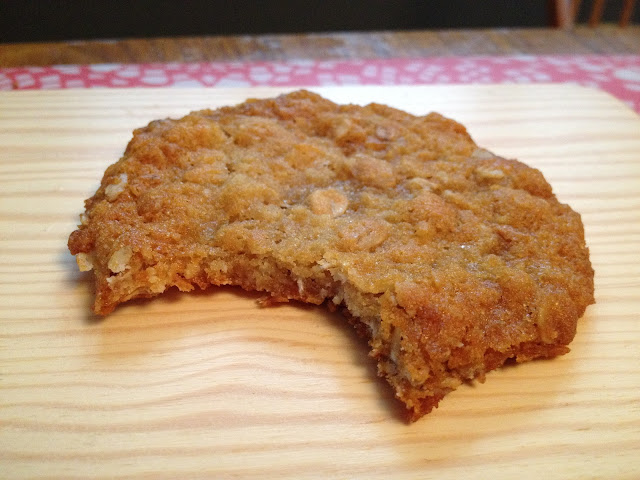 Anzac Day is a big deal to Aussies. I'm not going to go into the ins and outs of what it commemorates (look at the link for that), but it's a big deal for us.

When I met my husband I baked these cookies for him and he swooned. They are now his favourite cookie (or biscuit in Aus/NZ/UK speak).

What you will need to procure is some Golden Syrup. Do not even think about substituting corn syrup or anything else for this. It won't work and you'll blame me. In the US and Canada the most easily available stuff is Lyle's Golden Syrup. You can get it at most large grocery stores in the imported food aisle.

Preheat the oven to 350F


Put the flour, oats, sugar, coconut in a bowl and mix well. Melt butter and syrup on the stovetop. Mix the baking soda and boiling water in one of the measuring cups and then tip into the butter mixture - it will froth us a bit. Now pour this buttery deliciousness into the flour stuff and mix. Drop tablespoon-fulls of this onto lined trays (leave a good inch in between) and bake for about 12-15 mins. They will be golden - don't let them burn around the edges. Cool for 5 mins on the trays and then transfer to a rack and try not the eat them.
Posted by leila at 7:00 AM