Creamy Pasta in a Flash 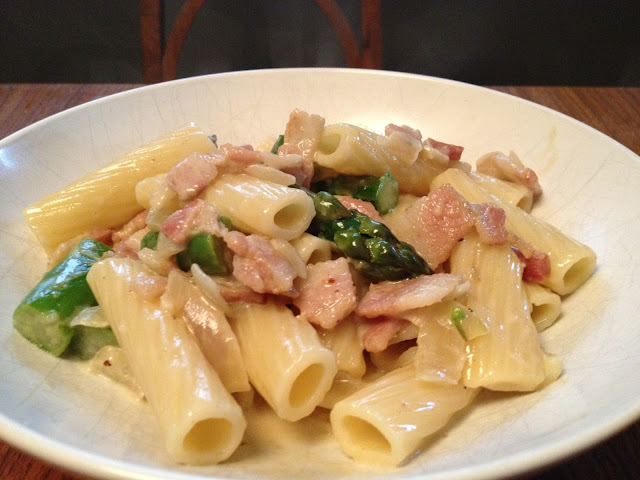 If my husband had his way, we would eat pasta every day. Add a creamy sauce and he is in heaven. When I am in a rush, this technique of making a creamy sauce hits spot on every time. Making the sauce takes the same amount of time as the pasta takes to cook, so....10-12 mins, tops. Who doesn't love a quickie?

Here's what you do:

Put the pasta water on to boil. When it's boiling, add the pasta and some salt. I like penne or linguine. Put your timer on for the requisite amount of time.


Saute the onion in some olive oil and add the garlic once it is softening. If you're using bacon, chop it and add it now. If you're using something that is already cooked, you'll add it after the sauce is done and just warm it through. Cook until the bacon and onion/garlic is nice and done.

Depending on the veg, you'll either throw it into the pan with the sauce (for quick cooking veg like asparagus, snow peas, or frozen peas). If you are using broccoli or something else which takes a bit longer, take a look at the pasta timer. For broccoli or cauliflower, I throw it in with the pasta for the last 3 mins of cooking and then treat is as though it is pasta (drain it, etc).

If you've gone the veg-in-sauce route, saute for just a minute - don't actually cook the veg through. Now throw in a good glug o' booze - white wine, marsala, beer, brandy, port...anything. Let it bubble and use it to scrape the brown bits off the bottom of the pan. Now put some cream in the sauce. Just enough to cover your solid ingredients. Now bring it to the boil and simmer for a minute or two until it's a bit thickened. By now your veg will be perfectly cooked and so will the pasta. Taste the sauce and adjust the seasoning.

Drain the pasta, pour most of the sauce over it, then plate it and arrange a bit more of the sauce on top of each plate. I didn't have any parmesan that day, but I recommend grating some on top.

As you use this method more and more, you'll get some tried-and-true combos. Here are some suggestions:
Posted by leila at 7:00 AM