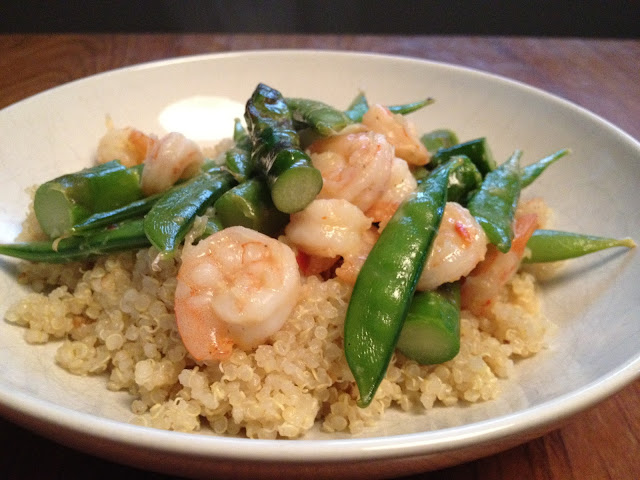 We should all eat quinoa instead of rice. Yes, that's what they say and I would except my husband doesn't like it as much as he likes rice. Luckily I have finally made a dish that made him want it more often! Yay!

I've also developed a very tasty and easy way of preparing the quinoa. 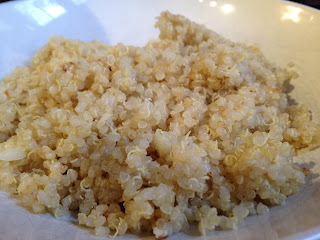 This is what it will look like when it is done. I use a rice cooker, which makes it super easy, but feel free to use whatever you normally do rice in (i.e. a pot). Start by putting however much quinoa (washed if it doesn't come ready washed) you want in the pot/cooker. I don't measure. Now add water. You'll add it until the water comes up to the first knuckle on your finger when you put it in and sit in on top of the quinoa. This is also how I do rice. Crazy, right? It works! Now chuck in a good glob of butter, some salt and 4-5 cloves of garlic, peeled. Turn on the rice cooker and ignore it until it's done or do what you'd do with rice, for about the same amount of time (usually 20 mins without peeking). When it's done, take out the garlic, mash it and then mix it back in with some more butter if you feel the need.


Fry the onion and garlic in a bit of oil or butter on med-high heat until starting to soften, then add the shrimp. Once they start to colour, add the veg (bite sized!) and about 1/4 - 1/3 cup sweet chilli sauce. Give them a swirl and add about a cup of cream. Bring to the boil and when the shrimp and veg are cooked, you're good to go. Taste to check the seasoning, but you shouldn't need to do too much - maybe a little black pepper.

Serve on top of the garlic quinoa and spoon some sauce over the top!
Posted by leila at 7:00 AM