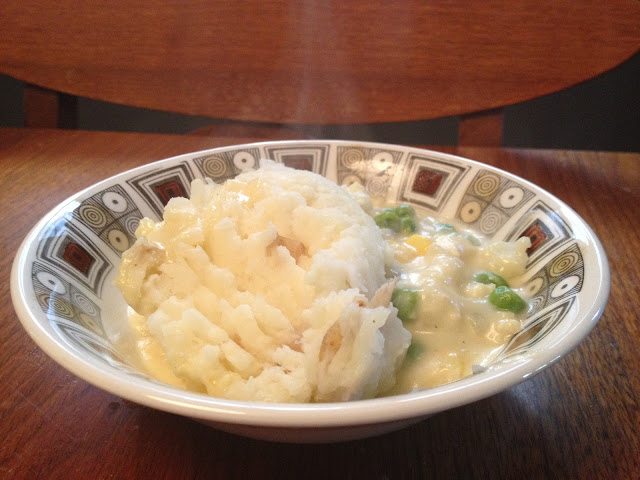 What is with this comfort food kick at the moment? I love a fish pie and one of my enduring memories of my grandmother and aunt is preparing fish pies to freeze. The kids gobbled it down and we had seconds. Essentially it's a creamy bechamel flavoured with onion, garlic and saffron with chunks of fish and veggies. This is topped with garlic mash. Yes.

Put water on the boil for the potatoes. Quarter about 7 or 8 spuds and whack them in the boiling water. Throw in at least 3 cloves of peeled garlic and a good pinch of salt. Ignore this while you get on with the interior.

Put a good glug - about 1/3c of olive oil in a pan (I used a dutch oven so I could stick it straight in the oven, but you can use whatever you want) and saute the garlic, onion, and celery. Throw in the flour and cook for a little while, until it looks like wet sand with chunks of onion in it. Um, yes.

Now start adding the milk, until it's thinned down to the consistency of heavy cream. You'll want to stir like crazy during this process. Technically you should heat the milk, but I like to live on the wild side. Now bring it to a simmer and it should thicken up a bit. You can add a little more milk if it gets too thick. Salt and Pepper. Now add your saffron and don't freak out about the cost. I buy mine in tiny boxes from Indian groceries and it is rarely more than a couple of dollars for an amount that lasts years. Truly.

Now chunk up your fish and throw it in, along with the veg. Let it simmer, stirring frequently until the fish is falling apart. Take it off the heat.

About now, your spuds will be tender. Drain them, then mash with lots of butter, salt and pepper. Add some milk for a good consistency and then dollop all over the top of the pie. Use a fork to spread it out and give it some good texture. Put it in the oven and let it do it's thing for as long as you can wait. Ideally, mine would have been golden brown on top, but the kids were clamouring for food and I didn't have the patience. But it was still goooooood.

After I took the pic I snipped some parsley over the top and it looked purty. Yep.