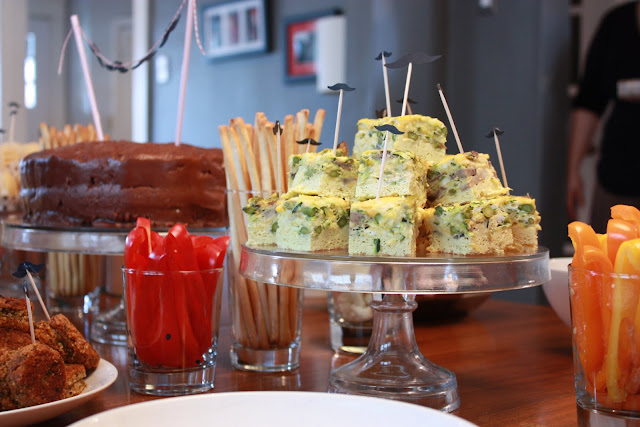 I had occasion to make another one yesterday for a friend who has just had a baby (welcome to the world, Nancy!). It was when I was making it that I realized that I hadn't shared a recipe. Well, method is probably more accurate as it's different every time.

Incidentally, I whipped up one of these when I was in early labour with Eleanor and ate it right after she was born. It tasted amazing as I hadn't eaten for about 12 hours!

Preheat oven to 350F. I generally use a 9" x 9" Pyrex dish, but any oven safe dish will do. Butter or oil it well. A skillet will also work well, but I find it's easier to use a dish.

Now, open your fridge and grab every veggie you have lying around in there. You'll need a total of about 4 cups once they are chopped, but it really doesn't matter if it's less or more. You'll just have more or less of the eggy stuff. In the photo above I used Asparagus and mushroom. Yesterday it was a box of frozen, chopped spinach (thawed in a pot) and about a cup of chopped mushrooms. Grab a large onion (essential) and chop it up. Saute it until it's soft-ish, but it doesn't have to be totally cooked because it's going in the oven. Mice up about 4 cloves of garlic and throw them in too. If you've got some bacon,  chop it up and throw it in with the onion.

Now, most veg won't need precooking, but some will - potato, (you can use leftover cooked potato), sweet potato and other hard veg will, unless you grate them. I find I like to grate zucchini too, to avoid precooking. I always precook mushrooms so they don't get a funny texture in the frittata. Other soft veg, like the asparagus can just be diced.

Beat about 6-8 eggs in a large bowl and season with salt and pepper. You can also add fresh herbs at this point. If i don't have fresh, i don't bother because this always ends up being very flavourful. A few Tbs of pesto is always good, too. Mix one big spoon of the hot onion-y stuff in first to "temper" it or bring the temperature up a bit, then throw in the rest of the onions and veg.

Now get some cheese. Lots of it. Reckon about 1.5 cups, grated. The more cheese, the better. Non-cheddar would be good too, especially Feta or Chevre. Mix it up. Live dangerously.

Mix it all up. If there's not enough eggy stuff between the beg, add a couple more eggs. Now scrape it into your dish. Put it in the oven and cook it until it's golden brown on top and not at all jiggly any more. This takes about 30 mins, but start checking after 25 mins, depending on how thick it is.

Leave it to cool and eat at room temperature. It's the perfect thing for picnics. You can also serve it for guests at a lunch on a bed of dressed micro-greens or mesclun. Yum!
Posted by leila at 7:00 AM