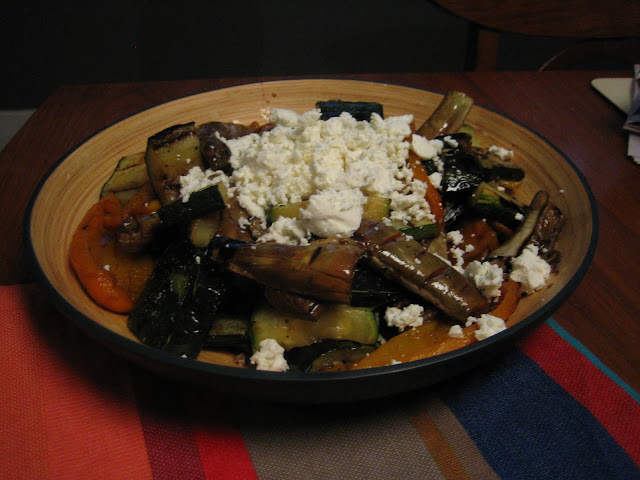 I love grilled veggies. We had some enormous zucchini from the garden this week as well as some lovely Lebanese Eggplant (the finger shaped ones) and some local Bell Peppers, so I decided to grill them simply.

I split the egglants lengthwise and sliced the zucchini lengthwise (about 1/2 inch thick) and then dipped them into a shallow dish with some olive oil in the bottom. I them placed them on a hot BBQ/grill, seasoning them with salt and pepper. When they were sufficiently brown and soft, I flipped them to cook them through, taking them off when done the same amount on the other side.

For the peppers, I just washed them and put the directly on the hottest part of the grill. As soon as they charred on one facet, I turned them slightly until they were black all over. Then I did the stem end and the bottom. The secret for easy peeling is to put them into a sealed plastic bag until they are cool enough to handle (10 mins?) and then the thin, black skin should easily rub off. You can just rinse any extra bits off under the tap, but a few black bits are actually quite nice. Then cut out the seeds and chop roughly.

I then chopped the other veg roughly and tossed them with a bit of balsamic vinegar and added a bit more salt and pepper. I also had a bit of goat's cheese int he fridge so I forked that on top. I didn't think of it at the time, but some chopped chives from the garden would perfect this dish!
Posted by leila at 7:00 AM