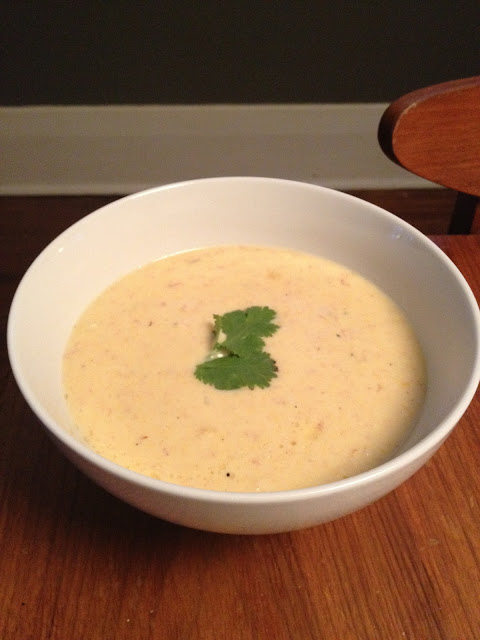 Chowder. Who doesn't love it? Creamy, delicious, and chock-full of goodness. I've been thinking about Corn Chowder for a while so I decided to make it tonight. I adapted this quickie version from the Joy of Cooking so that it uses frozen corn. And it doesn't contain any cream or flour!


Start by sauteeing the bacon until it goes brown and crispy (but not burned!). This is an important step because it gets those browning flavours really flowing. And your saliva too, as you drool over the smell of bacon. Throw in the onion and stir until it's translucent. Then put in your milk, potato, and 1 cup of the corn kernels. These kernels will infuse the milk with corny-ness and the ones we put in later will still taste fresh on not overcooked! I have method in my madness. Grind some black pepper in. Simmer gently until the potato is cooked. Now add the corn and bring back to a simmer for a couple of mins, until the corn is cooked. Now take out a ladle and a half full of the solids and set aside. Puree the rest with an immersion blender and then add the solids back. Taste, correct seasoning (add more salt and/or pepper if needed), and stir in the pat of butter.
Serves about 4, or 2 exceeding greedy people with no bread, crackers etc on the side.
Posted by leila at 7:00 AM