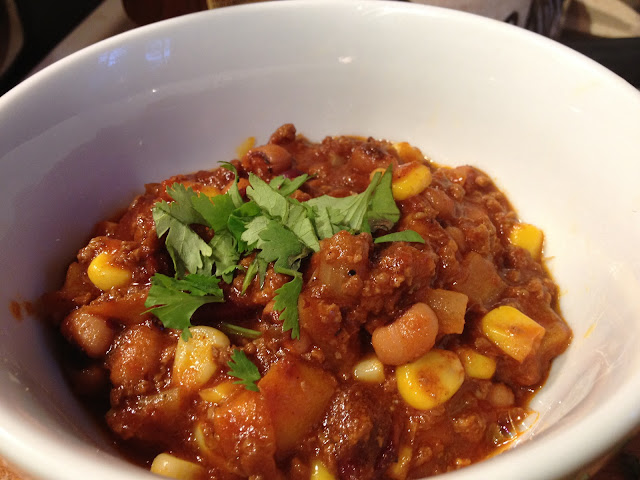 We went to a Chili cook-off last weekend and it was inspiring! And the result was probably the best Chili I have ever concocted!

Here's what I did:

Sauteed 2 onions and 6 cloves of garlic. Added 2 lbs (yes, it was a lot) of ground beef and chopped it around in the pot so it broke up. Once that was cooked, I added 1 canned chipotle or adobe pepper(can't remember - the can is long gone), about 1/4 cups paprika, 2 T Cumin, 2 tsp cinnamon, 1 T oregano. I then cooked off the spices until they were super fragrant.

I added 2 large tins of San Marzano Tomatoes, about half a box of chicken broth (it was too thick) and then simmered it for an hour. At that point I added a drained tin each of Red Kidney beans and Black Eyed Peas. Simmered another hour, adding more stock when necessary. I then tasted it and added some salt and pepper.

The last step was to dump in about 3 cups (this was a LOT of chili) of frozen corn kernels and brought it back to the boil, by which time the corn was done!

I was out of cornmeal, so I just served it with sour cream, cilantro, lime and cheese. Yum!
Posted by leila at 7:00 AM