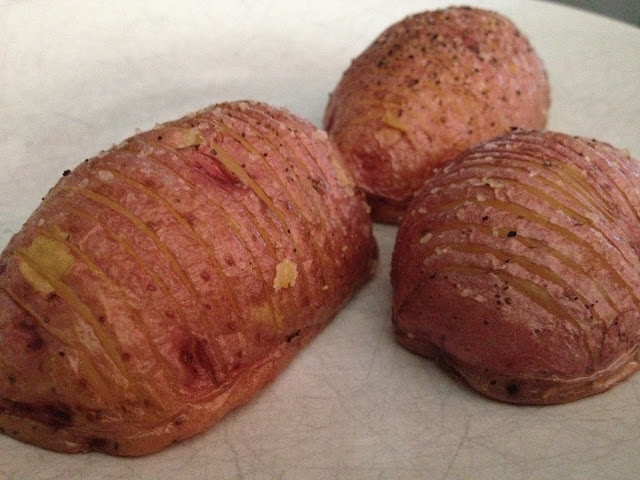 I've got no idea why they are called that, but they are. Basically, it's a cool way to cook spuds in the oven and it's super fast. Faster than baking. Plus you get yummy crispy bits which makes them A-OK in our house.

You can adjust the cooking temp to whatever you're doing. So if you're already using the oven at 350F, then use that. 450F is ideal, though.

Take a large pyrex dish and drizzle some oil (I used olive) in the bottom. Now take your (scrubbed) potatoes and cut them on half lengthways. Now you'll want to cut lots of slices most of the way through, but do not go all the way. My trick for this is to put a chopstick on either side of the spud and then slice perpendicular to the chopsticks - they'll prevent you from going through to the board. Much easier.

Place them in the pan with the skin side up and drizzle or brush more oil and then give a good grind of salt and pepper. Throw them in the oven and ignore them until they are done. Reckon it being about 45 mins, depending on the size of spud.

Do more than you think you'll need because they tend to disappear.

Email ThisBlogThis!Share to TwitterShare to FacebookShare to Pinterest
Labels: cooking, side dishes