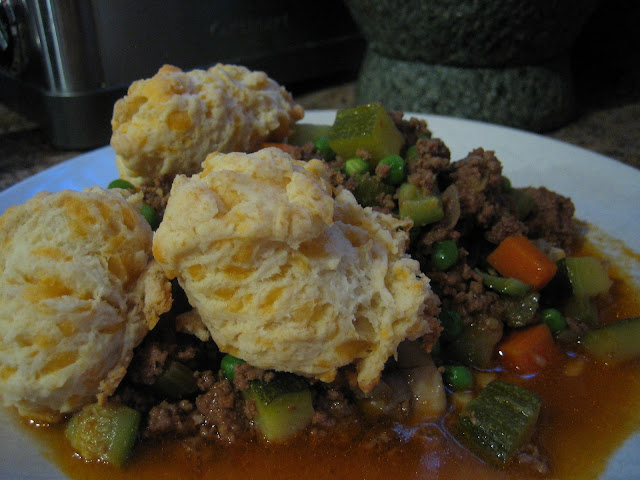 OK. I'll be the first to admit that this isn't a sexy, cheffy or cool recipe today. BUT it is a remarkably healthy, easy, and versatile meal.

Savory Mince. It's what your Aussie Grandma would serve up to you. And damn, it's tasty. Mince is what we called ground meat, in this case beef. Beef Mince. Ground Beef. Whatevs.

The cool thing about making a big pot of Savory Mince is that you can eat it like this (with the very North American touch of Cheese Biscuits), top it with mash and bake it into a Cottage Pie, have it on toast with melted cheese (Savory Mince on toast - real Granny territory!), add a can of tomatoes and put it on pasta, use it in lasagne, fill a pie shell with it...the possibilities are endless.

It's a pretty loose kinda thang, but here's the jist:

Chop up a couple of onions and start them off in some Olive Oil. Add some diced carrot and celery (I used 2 carrots and 2 sticks of celery). Now throw in a whole lotta (lean) ground beef. I used about 3-4 lbs because I was this to last a few days in different permutations). Start it cooking and break it up so you don't get big clumps. Chop up a bunch of garlic and throw it in (I used 4 cloves). Now chop up and add whatever veg you have languishing in your fridge. I used 3 zucchini, about 3 cups of chopped mushrooms, and some frozen peas right at the end. Once the meat is pretty much cooked, add a really good squeeze of Ketchup. Yes. Ketchup. In Canada our Heinz stuff doesn't have High Fructose Corn Syrup so we just buy that, but in the States you might prefer some other brand, like Eden Organics. You'll be using a fair amount though. I probably added 3/4 cup, though my large Dutch Oven was basically full - it doesn't taste like ketchup when you're done. I also added a shake or two of Worcestershire Sauce, Salt and Pepper. Don't over salt - remember that the ketchup is salty!

Now let it cook down a bit and plan its final incarnation. I baked some cheese biscuits because we were out of potatoes. Tomorrow I will buy some, mash them and put them on top and bake and we will eat it as pie. I may even scoop some out before that to use as a base for a pasta sauce. This is definitely the kind of thing you can eat for a few days without getting sick of it (as you're changing it up). I love to put loads of veg in there because the nutrients stay in the pot and you get it all. Kids also tend to love this dish. I hope you do too.
Posted by leila at 7:00 AM