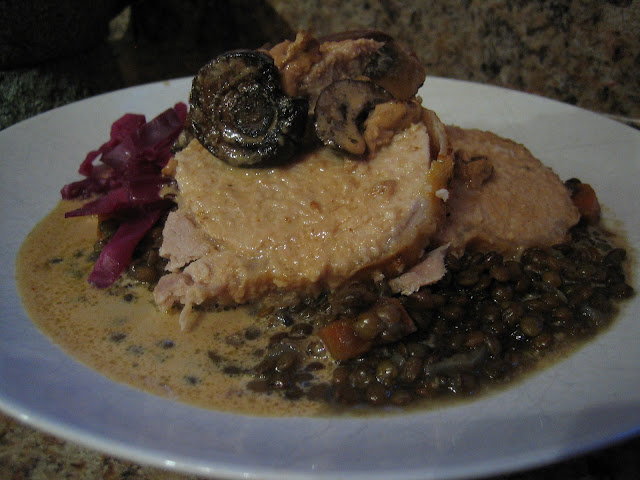 AKA: Possibly the most delicious meal I have ever cooked.

There. I've said it. I think that Saturday's meal was right up there. I don't know why it turned out so amazingly well - was is the pork itself? The creamy, dreamy gravy/pan sauce? The meltingly tender red cabbage with a kick of vinegar? The earthy lentils that Emmett ate 3 servings of? I dunno, but it was pretty darn good. Sorry, no humility here.

It was a bit involved but soooooo worth it. Reckon on it taking about 2 hours (though you can leave it alone for most of this time).


For the Pork Roast:
Preheat your oven to 450F


Take your garlic, chopped rosemary and zest and put it in a mortar and pestle and pound it. 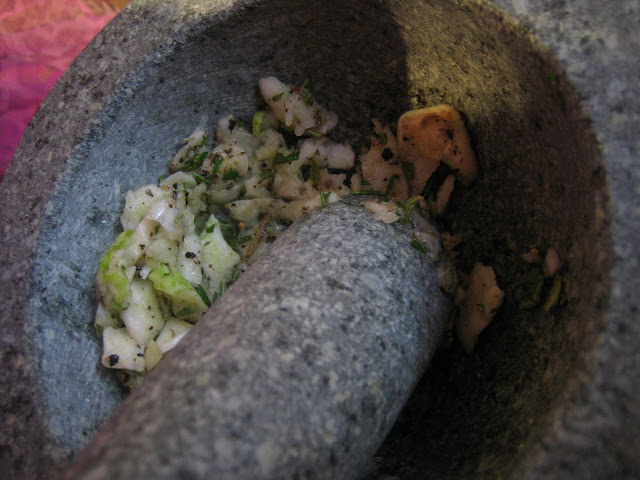 I don't know why I took a photo of it. Maybe it's because I love my huge mortar and pestle sooo much.

Now stick it in a bowl,add a good grind of pepper, quite a bit of salt and drizzle some olive oil in there to make a nice paste-y mess. Put a bit more oil in the bottom of a dish (you want it to fit the roast fairly well) and plonk your roast in there. Now rub that garlicky goodness all over it. If there are any cracks and crevices, make sure you fill those babies up. Then put it in the oven.

After 30 mins, turn the oven down to 350F. After another 30 mins - 1 hour total cooking time so far - chop up some mushrooms and put them in the dish around the roast. Around this time, start thinking about he lentils and cabbage. If it's dry on the bottom of the dish (probably won't be) add a cup of water. Once the roast has cooked for about 1.75 hrs, start taking its temperature. You want the internal reading to be 70 degrees Celsius. Mine took just over 2 hrs. Once it reaches that, take it out of the oven, tent it with foil and let it rest while you prepare the pan sauce.

The Pan Sauce
Once the meat is cooked, there will be some lovely liquid/mushrooms in the bottom of the dish. If your dish is metal, put it right on the burner for this next part. If it's not (mine wasn't), then scrape all the juices and the yummy brown-y bits into a frying pan. Now add a glug of booze. I used red wine. Marsala would have been my first choice. Anything will be fine. If you're using the metal pan, you'll then scrape the really caramel bits of the bottom of the dish (deglazing the pan). Now stick your  finger in there and taste the juices and assess what it needs. Mine tasted amazing and didn't need anything. Yours probably won't either because of the rub. Now put in about 1 cup of whipping/heavy cream and bring to the boil. You'll boil it a bit to reduce it/thicken it. That's it. Done.


Fry your onion and carrots in some olive oil until they start to soften. Add your lentils and about 2 cups of the stock. Season with salt and pepper, bearing in mind that commercial stock is quite salty. Bring to the boil and then simmer until the lentils are tender. If it looks too dry, add more liquid, but the aim to to get the lentils to absorb most of the stock. At some point (doesn't matter) shake in some Worcestershire Sauce. If you did add too much liquid, you can drain the lentils (that stock can be added to the pan sauce in moderation). But if you don't add enough you'll burn your lentils. Once they are cooked, you can put them aside and easily reheat them.
Braised Red Cabbage
This dish is a family fave of Peter's. It's a German-y kinda thang. I can't tell you how many times I ate this kind of dish in Germany. It was usually totally oversalted, so don't be too authentic!!
Put the cabbage, 1/2 cup water and a good glug of vinegar in a pot with some salt and pepper. Bring it to a simmer and put a lid on it. Check periodically to make sure there is still some liquid in the pan. Taste the cabbage as you go to see what the vinegar balance is like. You want it a bit tangy but not like pickles! When you're almost done, add about 1 tsp of caraway seeds. The cabbage should be uber-tender and lightly tangy. Oh, and bright purple.
Serving the beast
OK. I know that was long. But it's not hard in reality.
On each plate, put a pile of lentils and then some red cabbage. Carve off a few slices of meat and arrange artistically on the top and then put a generous amount of the pan sauce and mushrooms on and around it.
This is the kind of dish that could woo a Mother-in-Law. Try it.
Posted by leila at 7:15 AM

Email ThisBlogThis!Share to TwitterShare to FacebookShare to Pinterest
Labels: braise, cooking, herbs, how to, meat