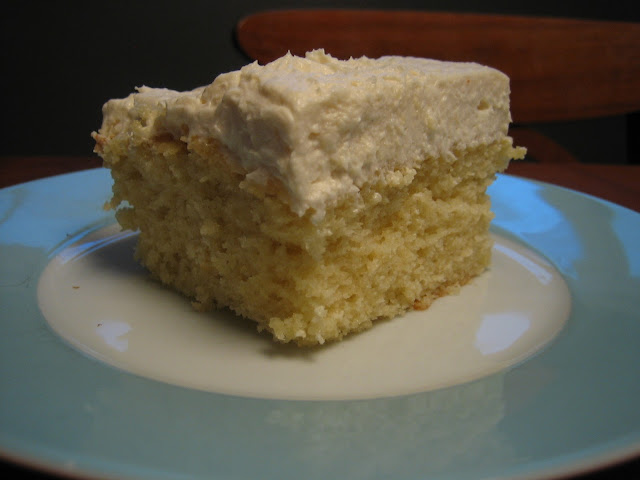 I've been a fan of the Pioneer Woman Cooks for a long, long time. I really love her step by step recipes (pics at each step!).

So when she said that this is the best frosting ever and it is the only one she ever wants to make now, how could I not rush to make it? Now, the method (starting with milk and flour!!) kinda freaked me out, but I did it anyway.

And, seeing as I was all out of cocoa, what could be a  more perfect pairing with this pure white frosting than a yellow sheet cake. Well, ok. I just made any old cake as a vehicle for the frosting.

So, because I followed both recipes verbatim, I'm not going to reprint them, but just link them:

The verdict on the frosting was...wow. It's pretty darn good, though I wouldn't want to never make another sort. The best way I can describe it is like...uh...Kool Whip, but homemade and delicious. Actually, I have only ever eaten Kool Whip once, so maybe it's like I think Kool Whip would be like.
Oh, and the title of this post is supposed to be a play on words as there is a type of cake in Adelaide called a Frog Cake. Yeah, I know. Not so funny if you have to explain it!
Posted by leila at 7:00 AM